Fraudulent minister gets (metaphorical) slap on the wrist 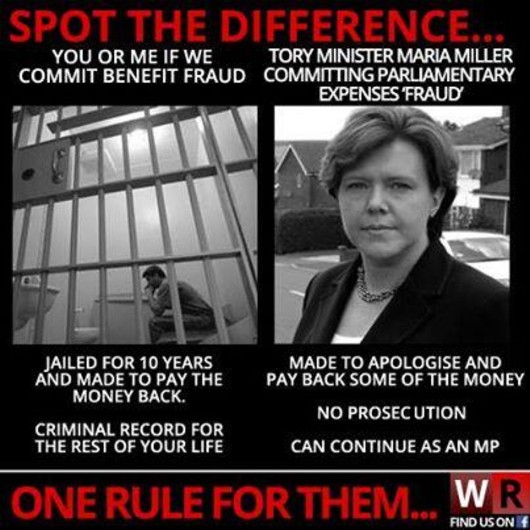 One law for them…: This image appeared on Twitter, summarising how the law treats MPs in comparison with the rest of us.

Fraudster – and Minister for Equalities – Maria Miller has been ordered to repay £5,800 and apologise to Parliament after an inquiry found she had over-claimed mortgage expenses.

In essence, she made fraudulent expenses claims that were not reduced to accommodate a fall in interest rates.

The Parliamentary Commissioner for Standards launched an investigation into her behaviour after it was reported that, between 2005 and 2009, she had claimed £90,718 in Parliamentary expenses for the mortgage and upkeep of a south London house that was occupied, not by Mrs Miller, but by her parents.

The Commons Committee on Standards did what’s usually expected and cleared Miller of the central charge – deliberately submitting expenses claims to which she was not entitled. Instead, she is being penalised because her attitude…