Yes, they have jobs … but the five people featured below are typical of millions who have no security, no holiday or sick pay, limited hours, and no dignity at work! 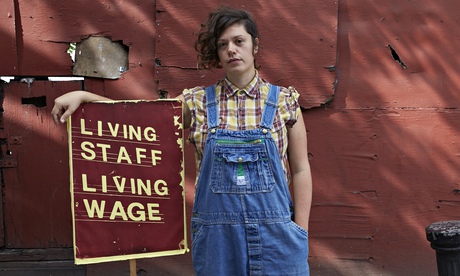 Nia Hughes, who is fighting for a living wage at the Brixton Ritzy cinema in London. Photograph: Andy Hall for the Observer

On a beach in north Devon a group of women demonstrate their skills with hula-hoops as part of a fitness class led by Marcela Almond, 35. She is one of the new self-employed, a group of people often viewed as another sign of the reviving fortunes of the British economy.

Employment continues to rise, while unemployment fell to 6.4% last month, the lowest since 2008. Part of the story of the growth in employment is that 40% of the jobs created since 2010 are the result of a shift to self-employment…