I was finally able to track down a history textbook containing a Tory anti-immigration cartoon aimed at the working class for the 1906 election. It’s reproduced in Martin Pugh, The Making of Modern British Politics 1867-1939 (Oxford: Basil Blackwell 1982) p. 84. Here it is: 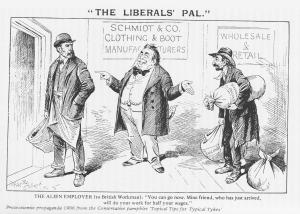 As you can see, it’s set in a factory, Schmidt & Co, Clothing & Boot Manufacturers, and shows a stout, upright British workman being shown the door by his fat foreign employer, while coming in the back way is a dishevelled foreigner, whose bags are marked ‘To England’, and ‘Steerage to England’.

THE ALIEN EMPLOYER (to British workman): You can go now: Mine friend, who has just arrived, will do your work for half your wages.

The caption also notes that it came from the 1906 Tory protectionist pamphlet, Topical Tips for Typical Tykes.

I’ve discussed this cartoon before, when one…