Ok, this article is going to show you four graphs, but one is for background and one of the others is just a different type of chart depicting the same information as one of the others, for those who find it easier to read..

Back in October, this blog published a prediction of NHS A&E (Accident & Emergency) waits that is currently being borne out by by the NHS ‘humanitarian crisis’ that has seen massive increases in A&E waits and in the number of patients being held over an hour in ambulances before they even get into A&E – and while they’re in an ambulance they don’t even show up in A&E statistics.

Here’s the predictive graph from that article, which shows waiting times reaching record levels of 22% – a 545% increase since the Tories took Downing Street in 2010: 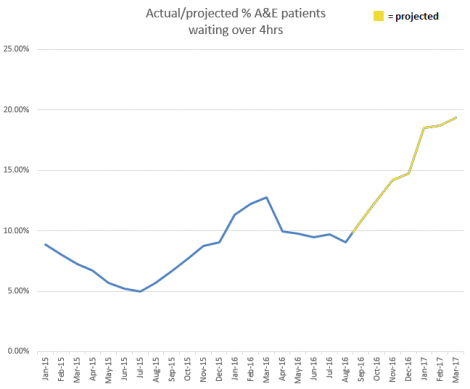 Predictably, the Tories are scrambling for excuses rather than accept…