Double Down video scoop proves what we told you last year: #Traingate was full

Double Down News (DDN) has carried out a great scoop by obtaining the full video footage of the train that Jeremy Corbyn took last August from London to Newcastle. Corbyn appeared in a video talking about the train being full while he sat on the floor.

Virgin released a tiny number of still images and a few seconds of video from the train’s CCTV footage. Richard Branson tweeted one image, claiming it showed Corbyn walking past unreserved seats, even though the image showed only seats with reserved tickets: 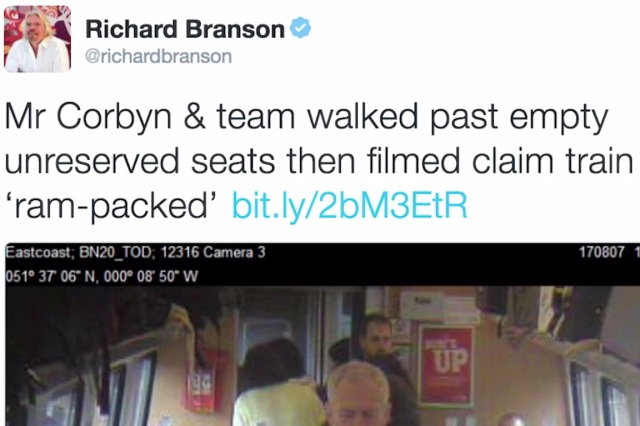 Numerous politicians and pundits joined in. BBC and other news channels treated as fact the claim that Corbyn had made a false statement. Radio ‘personality’ Nick Ferrari made a particular ‘chump’ of himself:

The furore was dubbed ‘traingate’.

DDN’s footage puts beyond doubt that the accusations against Corbyn were in fact the fake news:

It’s a fantastic piece of work by the…