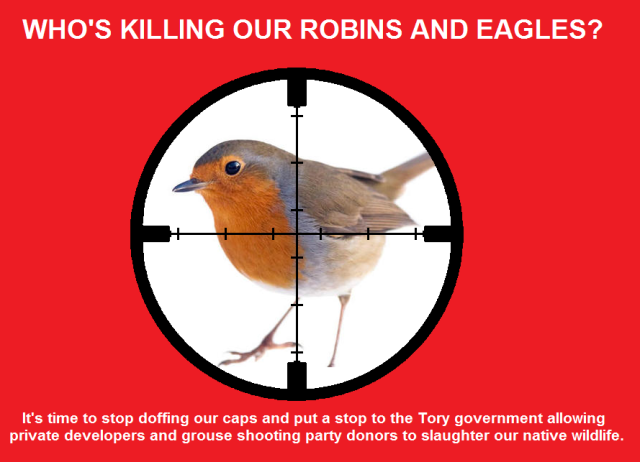 Since coming to power, the Tories have been granting permission for wealthy landowners and developers – many of whom are Tory Party donors – to kill native British wildlife – including robins, starlings, bats, badgers (of course), beautiful hen harriers and other rare species.

This war on our native British wildlife by the Tories has been happening under the radar – a gradual ratcheting up of a low intensity conflict against wildlife which includes granting obscure licences to developers to cull rare species or simply turning a blind eye to the illegal slaughter of birds of prey by grouse shooting landowners.

The latest moves are much bolder – the possible granting of licences for grouse shooting estates to kill rare birds of prey because their wealthy owners are worried they may be ‘interfering’ with their blood ‘sport’.

Eagles have been targeted.

Robins and starlings have been targeted.