This 15 March 2019 video from New Zealand says about itself:

Flowers for mosques around the country

People are laying flowers outside mosques throughout the country, following the Christchurch terror attacks. Wendy and Andrew Johnson delivered flowers to the mosque near Hagley Park in Christchurch. “Our hearts are just breaking for them… they should be safe to pray.” 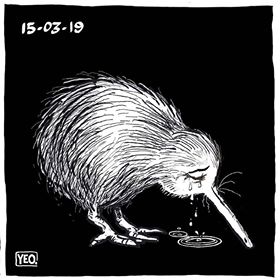 This picture of a kiwi, the national bird of New Zealand, symbolizes the grief about the bloody neofascist terrorism.

Like that kiwi, I cry. I wish all survivors strength and recovery. Especially the injured people now fighting for their lives in Christchurch hospitals.

Fears for the injured and missing in the Christchurch mosque shooting: here.

Their leader is an Australian nazi; an admirer, as he wrote, of Norwegian fascist…