Too poor to play: children in social housing blocked from communal playground

In a move reminiscent of the ‘poor doors’ scandal, a London developer has segregated play areas for richer and poorer residents. 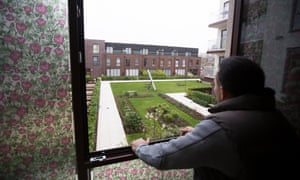 At least one multimillion-pound housing development in London is segregating the children of less well-off tenants from those of wealthier homebuyers by blocking them from some communal play areas.

Guardian Cities has discovered that developer Henley Homes has blocked social housing residents from using shared play spaces at its Baylis Old School complex on Lollard Street, south London. The development was required to include a mix of “affordable” and social rental units in order to gain planning permission.

Henley marketed the award-winning 149-home development, which was built in 2016 on the site of a former secondary school, as inclusive and family-friendly. It said the “common areas are there for the use of all the residents”.